University Ambassadors is an exciting student organization of highly-selected freshmen, sophomore, and juniors motivated to represent Missouri State University. As an Ambassador, you will be responsible for giving tours of campus to prospective high school and transfer students. You will also have the opportunity to represent the university at other on- and off-campus events which showcase our university. Being a member of University Ambassadors is rewarding and a great way to enhance your college experience!

Our history: from Honey Bears to University Ambassadors 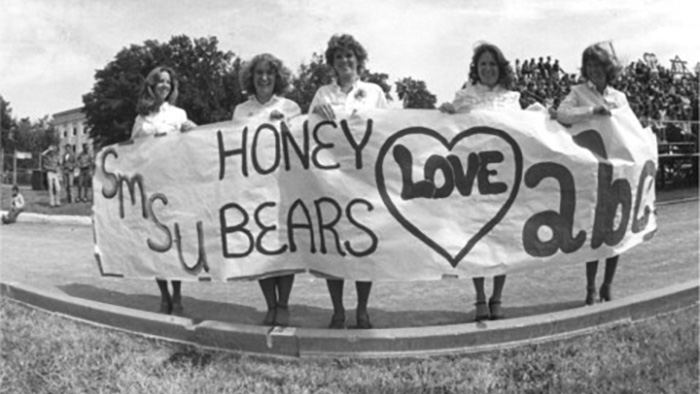 1981: The Honey Bears support the Bears Football Team.This game was broadcast on ABC.

In 1973, with the help of Don Payton, Director of Information and Publications, a group of students came together to form the student public relations team of the University – The Honey Bears. Ten females started an organization that would, over the years, become rich in tradition and an important strength of the University.

Through the years, the Honey Bears served as hostesses at various events, helped with the annual phonathons, and did their best to promote Southwest Missouri State University.

University Ambassadors would like to thank those first ten members who started our purpose and gave us a foundation on which to build and grow: Cathy Modby, Linda Bertel, Kathy Brown, Patricia Burgi, Barb Domian, Debbie Morrison, Alisa Munze, Cathy Nations, Linda Parrish, and Laura Skelly – we thank you!